Half sized. 40 pages of thoughts and stories. Just that. 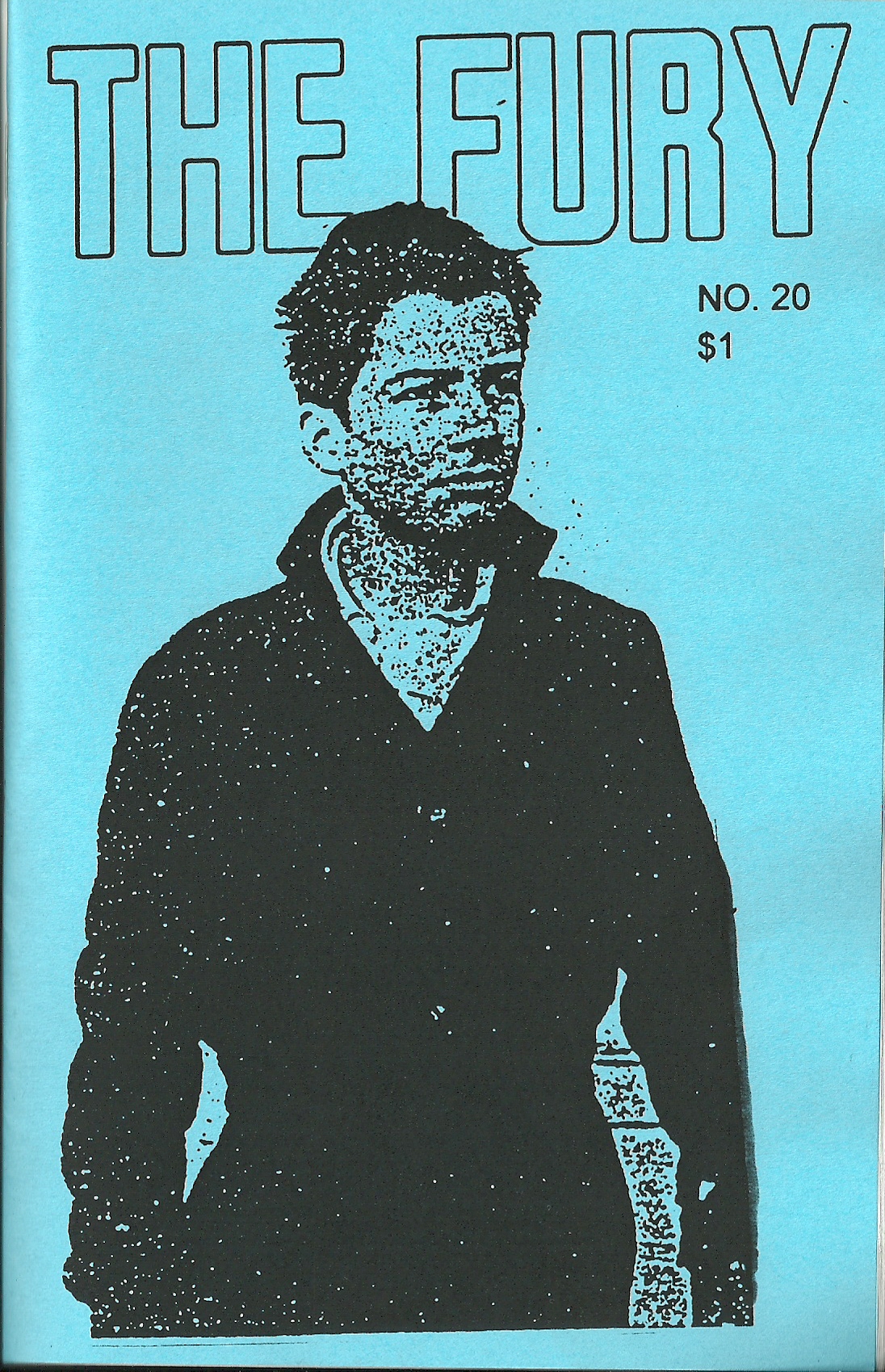 Periodically you might see better version of photos that have been in the zine along with various other visual art. Get into it! Includes some introspective writing about location over the span of time, a scene report of sorts from the Fireside Bowl days to the current emo revival, plus missing people, eras, and facts. Get into it!

Review: http://www.razorcake.org/punk-zine-reviews/fury-the-19-3-7-x-8--32-pgs-
Not a new issue, but I made some shorts with several friends when I lived in Bloomington, IN. They were for the Instant Gratification Film Fest, a theme-based monthly movie challenge.


Also check out this tour video from 97 Shiki is SE Asia that Douglas put together.
It features some photos of mine as well as the infamous cat cafe.

And a secret fort in the woods made by Luke Kraffft:

It features interviews with: Dez Cadena of Black Flag
Nation of Ulysses(reprint)
Antioch Arrow (reprint)
Touring with Volcano! in Europe, and 97 Shiki in Malaysia, Indonesia, Korea, and Singapore
The punk photography of Bill Daniel
articles on Abbie Hoffman and Jerry Rubin, the CIA's promotion of abstract art, the state of the protest, writings on music, assorted stories, outdated record reviews, and a ton of photos. Friends, rejoice! A bold new day has arrived!
The Fury #16 has birthed forth from the womb of a bedroom in midwestern america. Finally, you will be able to know how to live your life correctly.
In the tradition of the Dada, The Futurists, The Diggers, comes a voice of merriment, rebellion, and honesty in the physical restraints of a quarter sized, 52 page publication.
Witness the majesty of the well crafted iconography. Not unlike store front christmas presents, decorated nicely with nothing inside. MRR and Punk Planet have in the past praised it's genius, placing them on top ten lists. But The Fury holds no regard for their opinion, for it knows the bosomy love of the people of the streets is it's own reward.
Included within are several essays and stories which will prod your imagination and enrage your hormones. A tale of vagrancy on the campus of a Ivy League school recalling the magnificent story telling of London's "To Build a Fire" or Hemingway's Nick Adams stories, A scathing manifesto on the state of zines today, cultural critique of today's recorded musical products, A historical discussion of the delinquency of rock n' roll, also scenes in which band practice is broken up by a fight on the street, another in which, while living in S. Korea, a foreigner pesters him about obtaining prostitutes.
Available at Loop Distro or by mailing one dollar(American) to:
Mark Novotny
5413 6th Ave
Countryside, IL
60525

The Fury #15 is out and I'm home now to take mailorder. It's $3, Fullsized and 50 pages, taking me more than a year to finish.
Inside you'll find:
Assorted Stories on hitchhiking, getting thrown out of a bar over the Ramones, dodgeball, boredom, delinquency, romance, etc. Writings on cynicism in advertising, car culture and city development. A review of Afro-Punk, a trip to the Plan-it-X Fest in Bloomington, Interviews with Captured by Robots, Underdog, Dead To Fall, graffiti writer VEGAN as well as a bunch of rad photos of bands, handsome layout, and the usual zine stuff.
For a copy write:
Mark Novotny
5413 6th Ave
Countryside, IL
60525
or you can get a copy from Loop Distro along with back issues.
Collapse